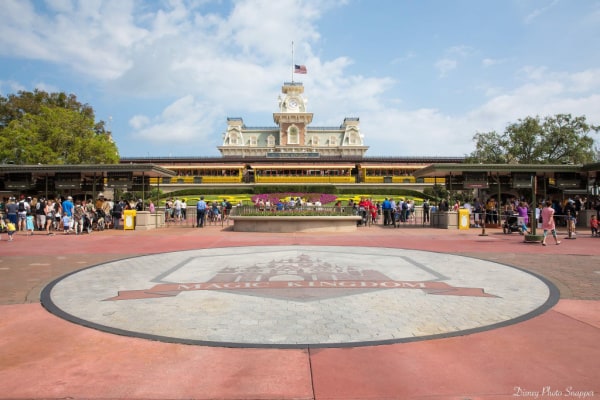 As you know, taking your family on a vacation to the Walt Disney World Resort — especially if it’s your first trip — isn’t something you decide to do and then show up and wander in when the date comes.

There’s a lot to learn.

To quickly get you ahead of the curve, I put together a list of the best tips that it took us a couple trips to finally get right.

Especially during Disney’s rainy season (July-September), rain can appear hard and fast out of nowhere. On one trip, we got completely drenched right as the park was closing. On another trip, we paid a fortune of Disney ponchos because we didn’t want to get drenched.

Now I always keep a few of these disposable ponchos in my park bag. (I also like to wear one on Kali River Rapids in Animal Kingdom when I’m not in the mood to get soaked.)

And umbrellas are also allowed at Disney World, if you prefer them instead of (or in addition to) ponchos.

Related Post:
What Disney World Rides Close in the Rain

The first couple times we went to Disney World, we just thought, “Okay, everybody pack your sneakers,” and that was the only thought we gave to shoes.

And everybody ended up with sore feet by the end of the day.

These are the shoes I’ve worn for the past 4-5 Disney trips.

And this shoe is the most popular one among my readers. (It’s actually prettier and cheaper than the ones I wear, but unfortunately I couldn’t get my feet to like them.)

For more information on shoes and the whole walking-at-Disney thing, check out:

It wasn’t until about our third or fourth trip that I brought some Frogg Toggs Chilly Pad Cooling Towels, and yes, they really make a difference:

Incidentally, on one trip we bought a cooling towel at the park and did not find that brand to be effective as the Frogg Toggs.

Related Post:
What are the Best Cooling Towels for Disney World?

The Unofficial Guide to Walt Disney World is invaluable (and funny)

Yes, blogs are helpful, but for a topic as broad as Disney World, I still like to have a book in my hand that I can easily refer to.

The Unofficial Guide to Disney World is by far my favorite book about planning a Disney vacation. It isn’t afraid to share the negative as well as the positive, and it also offers opinions from readers (which are sometimes hilarious). 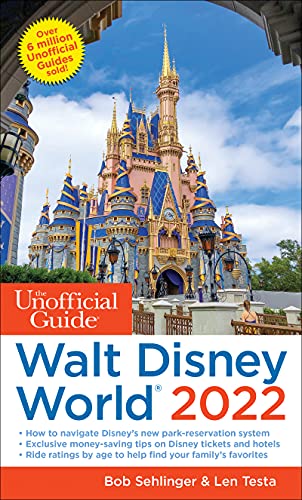 Don’t be afraid of the book’s huge size. You’re not going to sit down and read it from the beginning; you’ll just flip to the chapters and sections you need when you need them.

Oh, and one more thing: This is one time that you don’t want to get the Kindle version.

You can eat at Disney resort hotel restaurants even if you’re not staying at that resort.

I guess I knew that, but it took me while to really broaden my options when we made dining reservations.

Some people may argue that heading to a resort to eat wastes valuable time, but I guess it just depends on what’s important to you. We always enjoy one “relaxed day” where we sleep in a little, spend more time at the pool, and don’t go full-force at the parks, and this is when a resort meal can really be treat.

The other nice thing about eating at the resorts is that you can spend some time enjoying the resort itself, even though you may not have the gobs of money required to actually stay there.

Regardless of your dining choices, I would highly recommend you take the monorail (or walk!) from the Magic Kingdom to visit the Grand Floridian Resort at some point.

It has a beautiful lobby, often featuring live music, and the soap store, Basin White, is a lot of fun if you like things like bath bombs and scented soaps and lotions.

It takes forever to get to the Magic Kingdom.

You could say that it takes forever to get anywhere, but Magic Kingdom is especially bad, because you have to park in the Transportation & Ticket Center, then ride the little tram thing across the parking lot (since it’s huge), and then take the monorail.

Oh yeah, and then don’t forget having to go through security.

Speaking of taking forever: While the Disney buses are convenient, they’re not fast. Between making multiple stops at your resort and sometimes running late, it literally can faster to stay off-site and just drive in yourself.

All that to say: Make sure you always allow plenty of time to get where you’re going. And then maybe add another 20 minutes to that.

Meeting Disney Characters is more fun if you play the game. I’m really sorry to say that during our first few trips, our character meet and greets consisted of us just standing there, smiling, and then getting a photo.

It was fine and I always enjoyed it, but it felt more like something we were doing for the kids’ sake.

Over the years something dawned on me: the Disney characters are very skilled actors doing an improv show for us.

And once I realized that, I started having a lot more fun with the characters.

So have fun with it. Interact with the characters as much as possible. I’m sure that makes it more enjoyable for them too.

It can get cold during the winter months. When you think of going to Disney World, the last thing on your mind is how to stay warm.

But yes, the Florida weather can be cool — and even uncomfortably cold — in winter, especially in the evenings.

The photo above was taken in November. Notice how we’re all wearing jackets (and I have on my oh-so-fashionable socks with my sandals.) By the time it got dark that evening, we were cold. We got a great spot to watch the fireworks that night because the park was relatively empty.

So it’s important to be prepared. Make sure you bring at least a jacket, and probably even a hat and gloves.

Related Post:
What to Wear to Disney World During the Winter

Disney Pin Trading is fun and [can be] cheap.

One of my daughters got really into pin trading one a couple of our trips, and it added a nice extra touch without spending much money.

We bought a set of pins like this one and, everywhere she went, she would stop and look at pin trading boards or pins that a cast member was wearing.

It was like shopping during your entire trip without spending any money — plus I enjoyed the chats we had with all the cast members.

Arriving at the park before rope drop makes a big difference.

It’s not enough to arrive when the park open. You need to arrive 30-60 minutes before it opens (especially for the Magic Kingdom).

Those first 30 minutes really make a difference if you want to avoid long lines (and who doesn’t?). Being there at rope drop, ready to make a beeline for popular rides like Seven Dwarfs Mine Train or Space Mountain, is going to allow you to have a much shorter wait than if you come strolling onto Main Street ta 9:15am.

Plus the Opening Ceremony is a lot of fun.

You can have stuff shipped directly to your hotel.

A few years ago, Rob (my husband) and Ben (my son) decided that my Very Old Phone just wasn’t going to cut it for this trip, and that I should upgrade to at least just an Old Phone.

While on line for Spaceship Earth one morning, the two of them got on Amazon, did some research, and ordered me a refurbished iphone (yes, I’m an Apple girl), which I picked up at our hotel lobby less then 48 hours later.

Ordering things ahead of time to be delivered to your room is especially great if you’re going to Disney World with toddlers.

You can order umbrella strollers, diapers, wipes, and even surprise fun Disney stuff to be delivered to your room so you don’t have to haul it all over the place.

You can even order groceries through Prime Pantry — and have it delivered directly to your room. 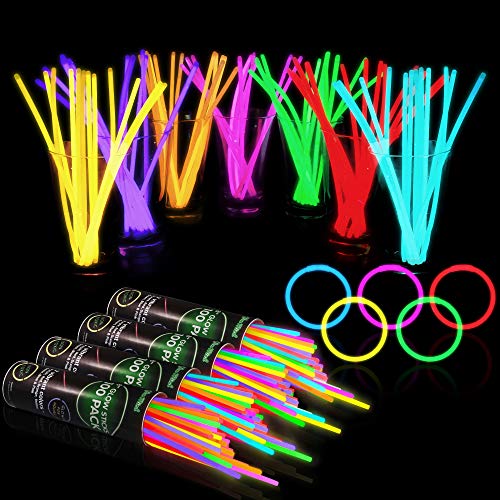 There’s just no excuse for not bringing glow sticks to Disney World. They don’t take up much space and they’re ridiculously cheap, especially if you buy them at the Dollar Store.

When it gets dark at the parks, you (and/or your kids) are going to see other people with glow toys and want some for yourself.

But you’re NOT going to want to spend $15 on them.

So do yourself a favor and buy them before your trip and throw a bunch into your park bag.

Also: I recommend bringing 5-10 extra glow sticks to the park (again, they’re super cheap) and passing them out to glow stick-less families nearby. It’s an easy way to make a kid happy.

You can get great photos with PhotoPass — without spending money.

Ugh … this is the one I regret the most. For years I totally ignored the PhotoPass photographers, thinking we didn’t need to spend any extra money on photos, we’d just take our own.

Now that my kids are older and I look back and see how few photos there are of the entire family, and how few “spontaneous shots” there are of meeting characters … yeah, I wish I had sprung for a few photos.

But it turns out that we didn’t have to spend any money at all.

We could have just handed our phone or camera to the PhotoPass photographer and they would have gotten a bunch of great shots for us.

So don’t make my mistake! Be sure to use those photographers, whether you spend money for it or not.

To be fair, I’m sure if Disney World even had Magic Bands on our family’s very first visit. But when we started using them, we immediately became fans.

A Disney Magic Band is a customizable waterproof wristband (mine even has my first name on the inside of it) that you can use around the parks and resorts for all kinds of things.

It’s your hotel room key, it’s your credit card, you can swipe it to buy dinner or a Dole Whip.

What’s nice is that once you have one, you can use it again on future trips.

The My Disney Experience App is a Must

You probably already know this. But if you’ve hesitated getting this free app for any reason, now is the time to go ahead and get it.

Among other things, it lets you check current wait times for popular attractions, use mobile order to purchase your Quick Service Meals so you don’t have to stand in line, and get GPS in-park directions. (Which is something I definitely need; even after these visits, I sometimes still get confused about where some things are.)

What do YOU wish you knew before your Disney World trip?

Now it’s your turn. Do you agree or disagree with this article? What things do you wish you’d known sooner? Let us know below in the comments!