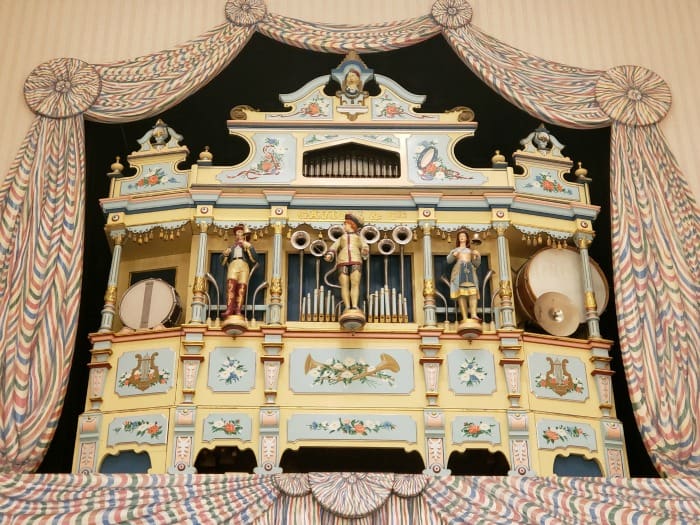 1900 Park Fare is a character dining buffet restaurant with high ceilings and a carnival and carousel theme.

I had dinner there for the first time last week on my adults-only trip to Disney World with my friend Loraine.

After reading this post, you’ll know about how to get to 1900 Park Fare, the menu, price, and what characters are there when. You’ll also learn about my experience there last night, and how I think 1900 Park Fare stacks up to other similar Disney restaurants.

Yes, both breakfast and dinner are buffet-style meals.

What characters are at 1900 Park Fare?

1900 Park Fare is a little weird in that the characters are distinctly different at dinner from what they are at breakfast. I sometimes wonder how many people are disappointed because they show up excited to see a Disney princess and are instead greeted by a big yellow bear.

(If you don’t recognize those last 3 names, they’re Cinderella’s stepmother and stepsisters.)

We actually ended up with a slightly different cast of characters when we had dinner there, which I’ll get to in a moment.

How long does it take to get from Magic Kingdom to 1900 Park Fare?

At the time of this writing, a walkway is being built from Magic Kingdom to the Grand Floridian. The walk will be a little less than a mile.

Otherwise, you can reach the Grand Floridian from outside the Magic Kingdom gate entrance via:

Either way, allow yourself about 20 minutes for the entire process of waiting and then actually traveling.

Since the monorail is on a loop, getting back to the Magic Kingdom after eating will be quicker, as it’s the next stop.

Can you see fireworks from 1900 Park Fare?

No … probably due to the fact that 1900 Park Fare has no windows.

However, if you plan things so that you finish dinner before the fireworks, there are a few viewing spots that you can easily get to.

Yes and no — but mostly no.

The only Disney restaurants that have a true dress code are the Signature Dining restaurants (for example, Narcoossee’s, also located in the Grand Floridian).

The other restaurants, 1900 Park Fare, are what’s called “resort casual.”
This means you can’t:

Since I assume you weren’t planning to dress like that anyway, I tend to think it’s not really really a dress code.

Since the Grand Floridian Resort opened in 1988, 1900 Park Fare has always existed by that name and (unlike Magic Kingdom’s Crystal Palace) has always been a character restaurant.

I was surprised that I couldn’t find a definitive answer as to where 1900 Park Fare got its name. The best I could find was this description from someone on the DisBoards. I have no idea whether or not it is true, but …

Supposedly the Grand Floridian was a homage to a man named Henry Morrison Flagler.

Mr. Flagler developed a the Ponce de Leon Hotel in St. Augustine, which was credited for tourism increases for both St. Augustine and the state of Florida in general.

Both the hotel promenade and hotel eatery at Ponce de Leon were called “Park Fare”.

The Grand Floridian Resort & Spa is meant to portray the Victorian Era of around the year 1900.

Nope.
Unlike Cinderella’s Royal Table in the Magic Kingdom, 1900 requires only 1 Table Service credit on the Disney Dining Plan.

Since the only time I really drink alcohol is when the drink resembles dessert, I had a Godiva Chocolate Martini:

Loraine got the Beso del Sol Red Sangria, which also looked quite good: 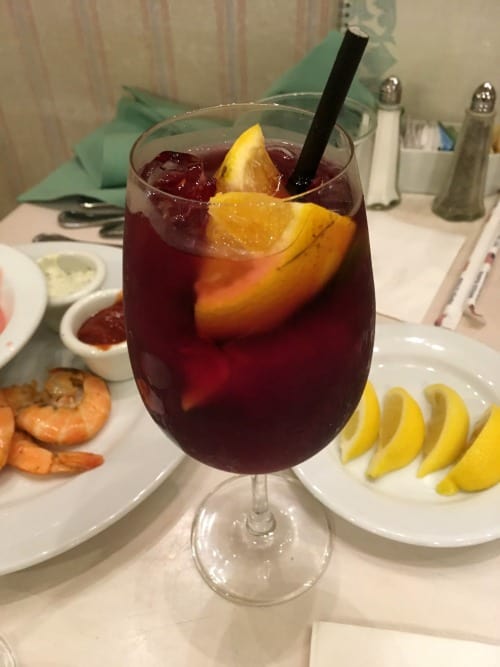 Some other alcoholic drinks on the menu include:

They also offer these non-alcoholic drinks:

We had no plans after dinner, so we were in no rush and I didn’t pay any attention to how long we were there.

However, for people who have plans to head to the Magic Kingdom or watch the fireworks after eating, this is a good question.

I would say to allow yourself about an hour and a half. You definitely don’t want to feel rushed. And note that this only includes your time at the restaurant, not the time spent traveling.

This was first time at 1900 Park Fare, and I was really excited because I had heard that watching the step-sisters in action was worth the price of admission.

I was even planning to ask them to sing, and maybe even sing with them (depending, I suppose, on whether I met them before or after my martini).

When our server arrived at our table and introduced herself, she said, “I have some unfortunate news … not all of our characters are here tonight. We have Cinderella, Lady Tremaine, and Suzi Mouse.”

“Not the stepsisters?” I yelped. “But that’s the whole reason we came!”

The server nodded empathetically and explained that there was an upper respiratory infection or something going around. She said she would be happy to re-schedule or give us a 20% discount.

After discussing it, we reluctantly decided to stay and take the discount, because

We still had a really good time, but of course I don’t feel like I got the real 1900 Park Fare experience — because I didn’t. I guess I will just have to go back, ha.

(Side note: Notice that I couldn’t care less that Prince Charming wasn’t there. He doesn’t sound very exciting to me.)

However, Suzi Mouse was a nice surprise, and I always like the “cute and cuddly” characters. 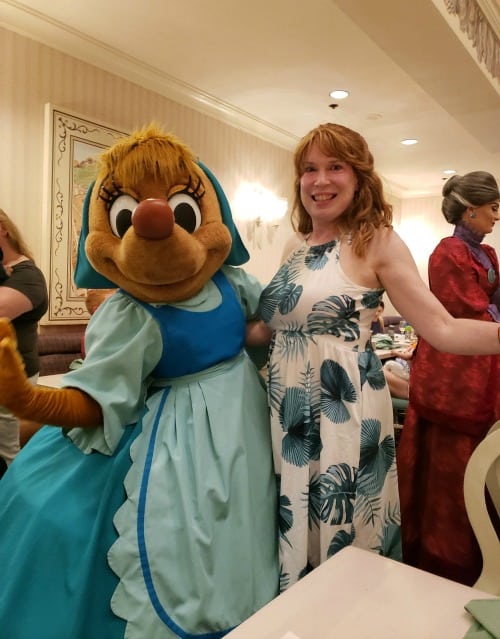 And Lady Tremaine was pretty entertaining.

“I’m so sorry your daughters aren’t here tonight,” I told her.

“Oh, really? I’m not,” she said dryly, with a frown and an eye roll. I’m enjoying the piece and quiet.”

“Cinderella told us they were practicing their singing. She said they needed the practice.”

“Oh, did she say that? Did she also say that she needs to practice her chores?”

Lady Tremaine also taught us how to pose properly: 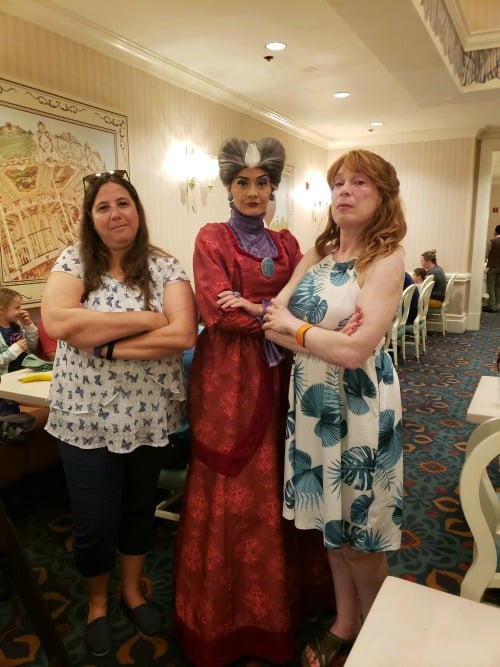 The food was a lot better than I expected. That sounds funny — why would I go to a restaurant where I don’t expect the food to be good — but my expectation at a character buffet is for the food to be “fine” and not much more.

But Loraine and I were both quite impressed. We kept saying to each other, “You’ve got to go back and try the salmon!” “You’ve got to try the butternut squash ravioli!” There wasn’t a single thing we tried that either of us disliked.

I had heard amazing things about the strawberry soup. Other than it being unique, it didn’t get me too excited, and it certainly wasn’t my favorite thing at the buffet. Like I said to Loraine, “It would be better if it had a cake underneath it.”

I didn’t have much room left for dessert because I filled up on everything else, but I made a little sampler platter and took one bite of everything. Loraine loved the pumpkin cheesecake.

1900 Park Fare vs. Other Restaurants

People often are trying to narrow their dining choices down to two somewhat similar restaurants.

Here are my thoughts on 1900 Park Fare versus two other table service restaurants on the Magic Kingdom monorail loop:

This one is a pretty tough call. I would highly recommend either one.

Here are my thoughts:

Oh, I’m sorry. You know how one of my favorite pastimes is to rag on Chef Mickey’s.

Seriously, though … if you’re trying to decide between those two restaurants, here are my thoughts:

If you want to enjoy some of 1900 Park Fare’s famous strawberry soup, it’s not too hard to make. I still maintain it would be perfect if you poured it on top of a pound cake.

What has been your experience with 1900 Park Fare? Did you enjoy the food as much as I did? And just out of curiosity, have you ever been to a character meal and been told told the character wasn’t going to be there? Let us know below in the comments! 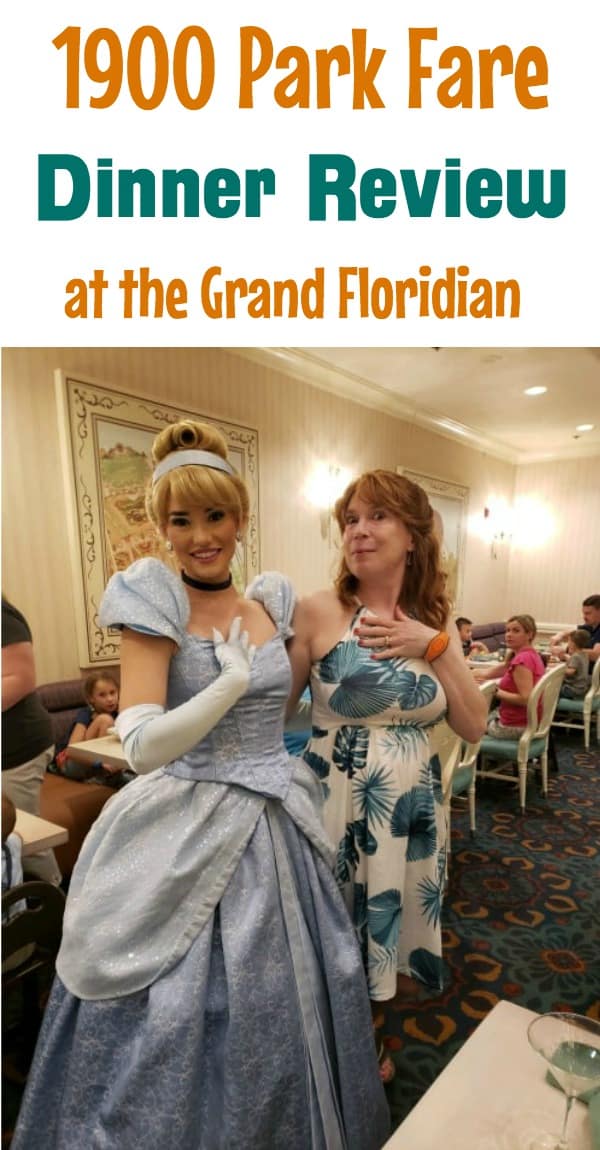 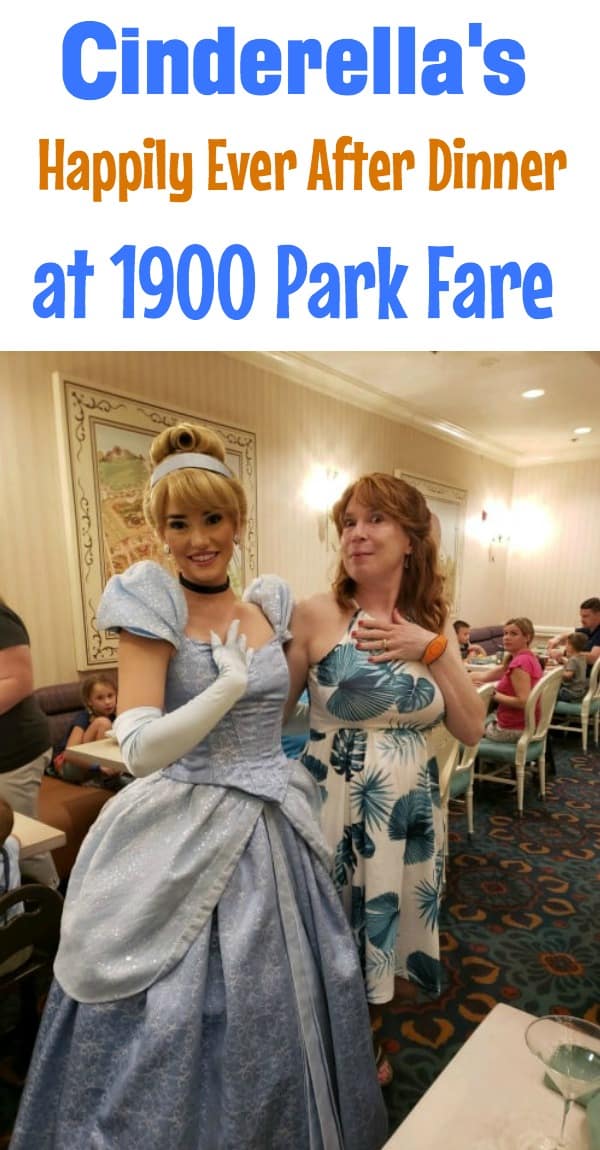 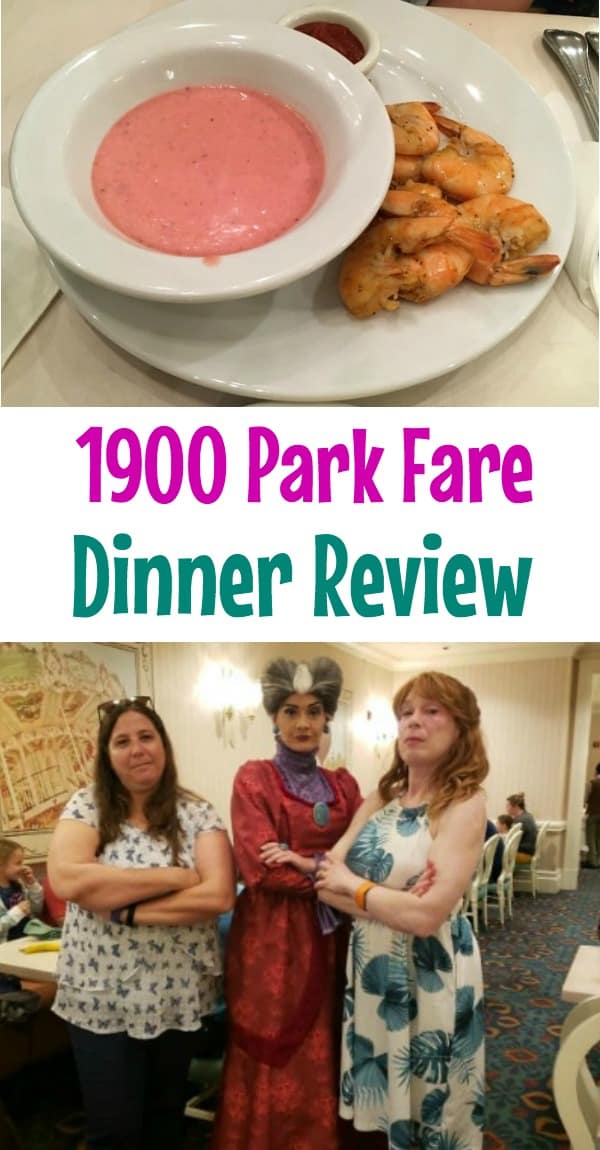 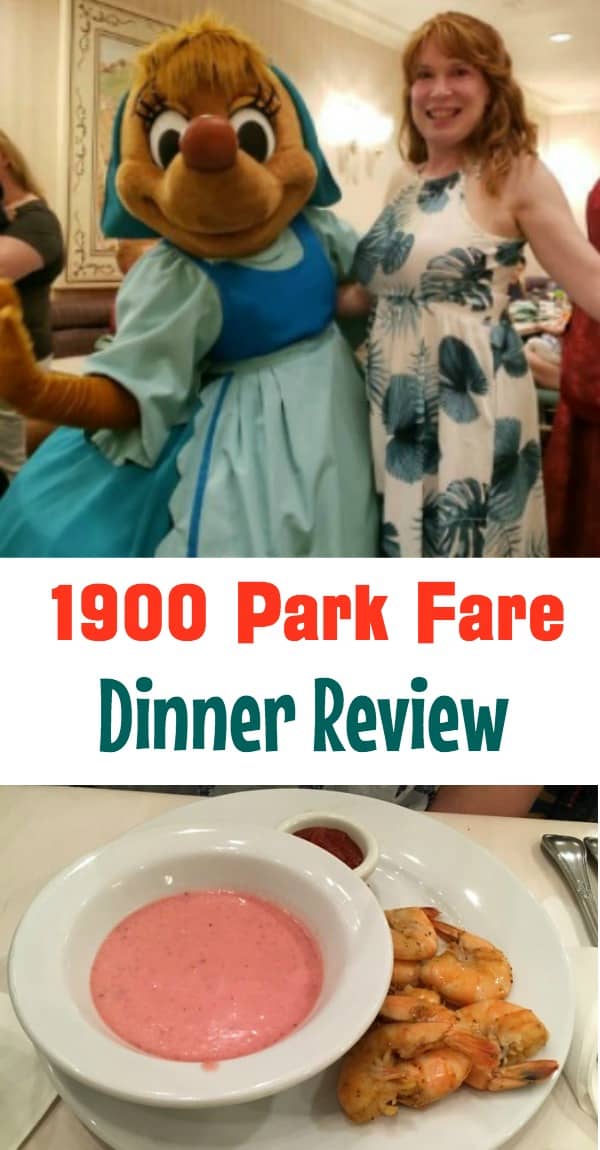