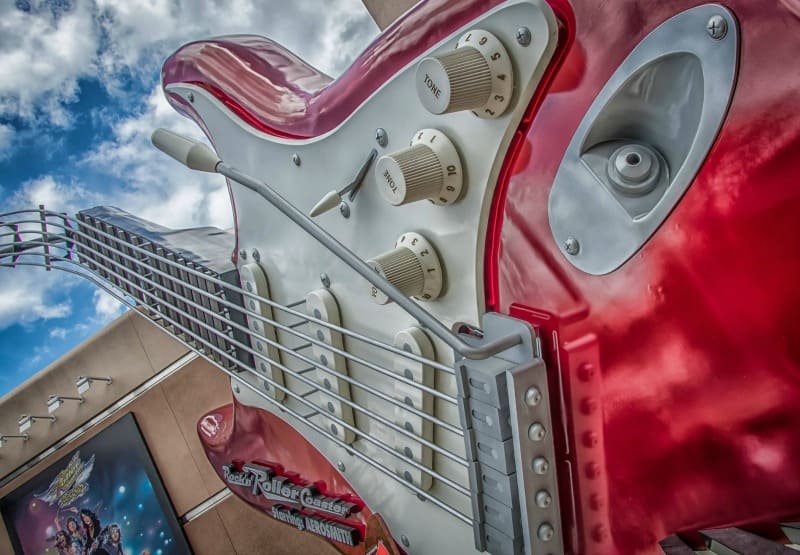 Rock n Roller Coaster in Walt Disney World’s Hollywood Studios, a fast roller coaster with loops that blares Aerosmith music through speakers near your head during the ride, is a good prop to illustrate the differences between me and my husband Rob.

I, on the other hand, can and will ride anything, no matter which direction it goes in. I love Rock n Roller Coaster, usually ride it twice in a row, and sing along with the soundtrack.

I guess it just goes to show that tastes in Disney rides (and music) isn’t what makes or breaks a marriage.

In this post I’ll try to answer every question you might have about Rock n Roller Coaster, one of my favorite rides at Disney World.

Construction on the ride began in February 1998, and the grand opening was on July 29, 1999. As a point of reference, Hollywood Studios opened in May of 1989 (although the park was originally called Disney-MGM Studios until January 2008) and Tower of Terror opened in 1994.

You need to be 48 inches tall (exactly four feet) to ride. This is a taller height requirement than Big Thunder Mountain Railroad, Space Mountain, or Expedition Everest.

Does Rock n Roller Coaster Have a Single Rider Line?

Yes. If you don’t mind being split up from your group and sitting next to a stranger, you can save a little bit of time by getting in the single rider line, located next to the FastPass entrance.

The bad news is that, unlike Epcot’s Test Track (which seats 3 guests per row instead of 2), the single rider line doesn’t move much faster than the regular standby line.

You might want to ask a Cast Member what the estimated wait is for the single rider line. Or, if you prefer technology over speaking to people and like your information to be more precise, you get Touring Plan’s app, Lines, which will give you the wait time for both the standby and the single rider lines so you can compare and make the best decision.

Speaking of wait times, they can easily be up to 90 minutes or more during high-crowd seasons, so I would definitely recommend getting a FastPass if you can. 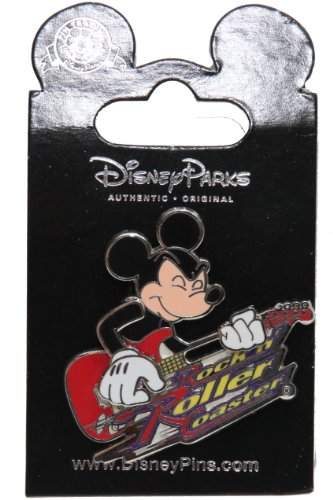 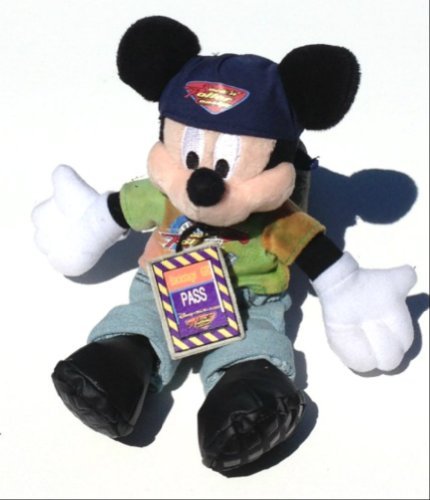 Does the Rock n Roller Coaster Go Upside Down?

Yes, although in a weird way you don’t notice it as much as your typical roller coaster with an upside down loop. I don’t know if that’s because of the speed, the dark indoor environment, or the nature of the inversions.

There are three total inversions, a first two a Disney attraction. Wiki describes them as “half-vertical loops, half-corkscrews, and a sea serpent roll.”

The first time I rode Rock n Roller Coaster, in the first 5 seconds of the ride I was absolutely terrified and thought, “OhNoNoNoNoWhatDidIJustGetMyselfInto!?!”

The funny thing was that, when I told my girls that after the ride, my oldest daughter Rachael said she was thinking the exact same thing.

At its launch, Rock n Roller Coaster accelerates from 0 to 57 mph in 2.8 seconds has has a g force (gravitational force equivalent) of 5. (A rocket launch only has a g force of 3, yikes.)

Luckily (I guess?) you can see the launch while you’re waiting in line, so at least you can sort of expect it.

Have there Been Any Rock n Roller Coaster Deaths?

Sadly, yes, there was one death on this ride.

According to Wiki, in June 2006, a 12-year-old boy from Kentucky, was unresponsive at the end of the ride and declared dead on the way to the hospital. The death was said to be the result of a congenital heart defect.

I remember hearing a long time ago that when Aerosmith first came out in the 1970’s, critics called them a “poor man’s Rolling Stones” … which is kind of funny, because that’s exactly what they are in the story of Rock n Roller Coaster.

According to Jim Hill Media, Disney approached Mick Jagger and Keith Richards in the spring of 1998, while the roller coaster was still under construction, asking if they would be interested.

The Stones were interested — but for a huge licensing fee, something to the tune of $7 – $10 million per year.

This was way out of Disney’s budget, so they approached Steve Tyler, Aerosmith’s frontman. This made total sense, not only because they are a poor man’s Rolling Stones, but because Aerosmith had just been signed by Touchstone pictures to perform “I Don’t Want To Miss a Thing,” for the movie Armageddon, so there was already a Disney connection of sorts.

More importantly, he loved it for about the tenth of the price that the Rolling Stones did.

Note: Some people say that U2 had been approached by Disney to be the featured band, but I never saw that from any reliable source, and I personally find it pretty hard to believe. Could you even remotely imagine Bono agreeing to be part of a Disney World attraction? Yeah, I didn’t think so.

According to Mickey Wiki, each “limo” has its own unique soundtrack, which is identified by its license plate:

UGOBABE– “Love in an Elevator” and “Walk This Way”
(Interestingly, this license plate used to be “UGOGIRL” but was changed to “UGOBABE” to be “less sexist.”)

H8TRFFC– “Back in the Saddle” and “Dude (Looks Like a Lady)”

I’m lucky that I don’t get motion sick, but I was thinking that a ride that goes 57 miles per hour and has three corkscrews isn’t a good choice for someone who does.

Apparently many people who suffer from motion sickness don’t have a problem with Rock n Roller Coaster.

Qtwns from the DisBoards says:

If you want advice from the Queen of Motion Sickness, I’m your gal. I cannot ride motion simulators, ever!

Rock n Roller Coaster is not a problem. It is a smooth ride if you ride in the middle or near the front. If you want your brains jerked out, ride in the back. Cast members have always been very accommodating when I request to ride from the middle up to the front…trust me, there is always someone waiting to ride the back car … You go too fast to realize you’re up side down until your right side up again!

I can ride it at least once. Multiple times would push it. You can see, sort of. And I thought it was much smoother than Space Mountain. i have now gone on it about five times.

To put it in perspective, I cannot even sit as a passenger in a car without some level of motion sickness. Reading is impossible. Motion simulators are a guarantee for hours of nausea. But I can ride roller coasters. RnR is a fun one!

Personally, I like Rock n Roller Coaster much more than Space Mountain.

For one thing, the whole idea of a roller coaster that plays rock music is totally my jam, so right from the start it earns extra points in my book.

Second … I just don’t like Space Mountain all the much. I find it physically uncomfortable because of the jerkiness, and the whole “roller coaster in the dark” thing makes me wince.

Which is weird, because guess what Rock n Roller Coaster is? A roller coaster in the dark! But I think the difference is those flashing lights on Space Mountain. I dunno. I just don’t like it.

I will say that Rock n Roller Coaster is more smooth and definitely faster (about twice the speed of Space Mountain).

Here’s what some other people had to say about the differences between the two coasters:

KimR on the DisBoards says:

On the other hand, Space Mountain is slower and doesn’t have any loops, but it has more drops and is much jerkier – I do sometimes feel as though I am going to fly out even though rationally I know I will not! It just depends on what freaks you out on rollercoasters, though. (I love inversions, but hate drops).

Coming from a completely unexperienced roller coaster rider, I would say Space Mountain is a bit rougher on the stomach. I have ridden both, and Rock n Roller Coast is definitely faster but it is much much smoother than Space Mountain. SM is much slower but speed is relative, has more unknown twists and turns, and jerks you around a bit more.

C’mon, think about it. You can drive down the highway at 80mph and unless you take a sharp turn your body doesn’t even feel it. Space Mountain is the rougher I believe for the newbie coaster rider.

If you want some more detail about what Rock n Roller Coaster looks like and how exactly it works, check out this video.

In this review, they says the ride loses points for its weak theming and queue (by Disney standards). I guess I would agree (especially about the queue), but I’ve always enjoyed the ride itself too much to really think about it.

What Do You Think of Rock n Roller Coaster?

Do you like Rock n Roller Coaster better than Space Mountain?
Does it make you motion sick?
Is “UGOBABE” less sexist than “UGOGIRL”? 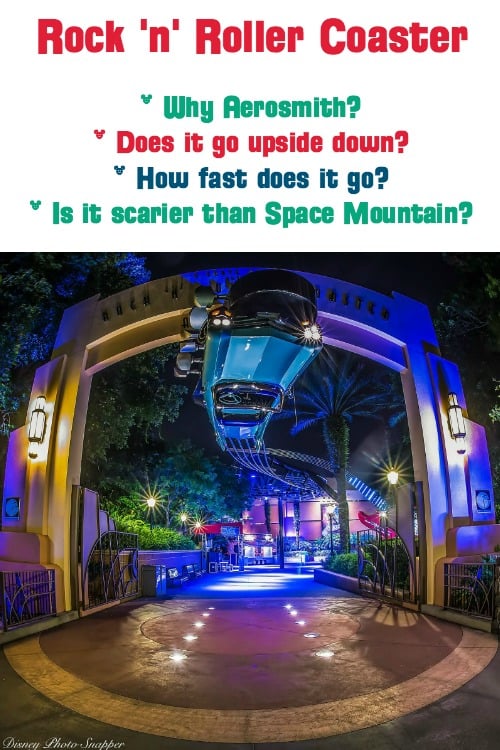 Does Space Mountain Go Upside Down? (plus height requirements, and is it scary?)
Disney PhotoPass vs. Memory Maker (Plus Cost and Locations)