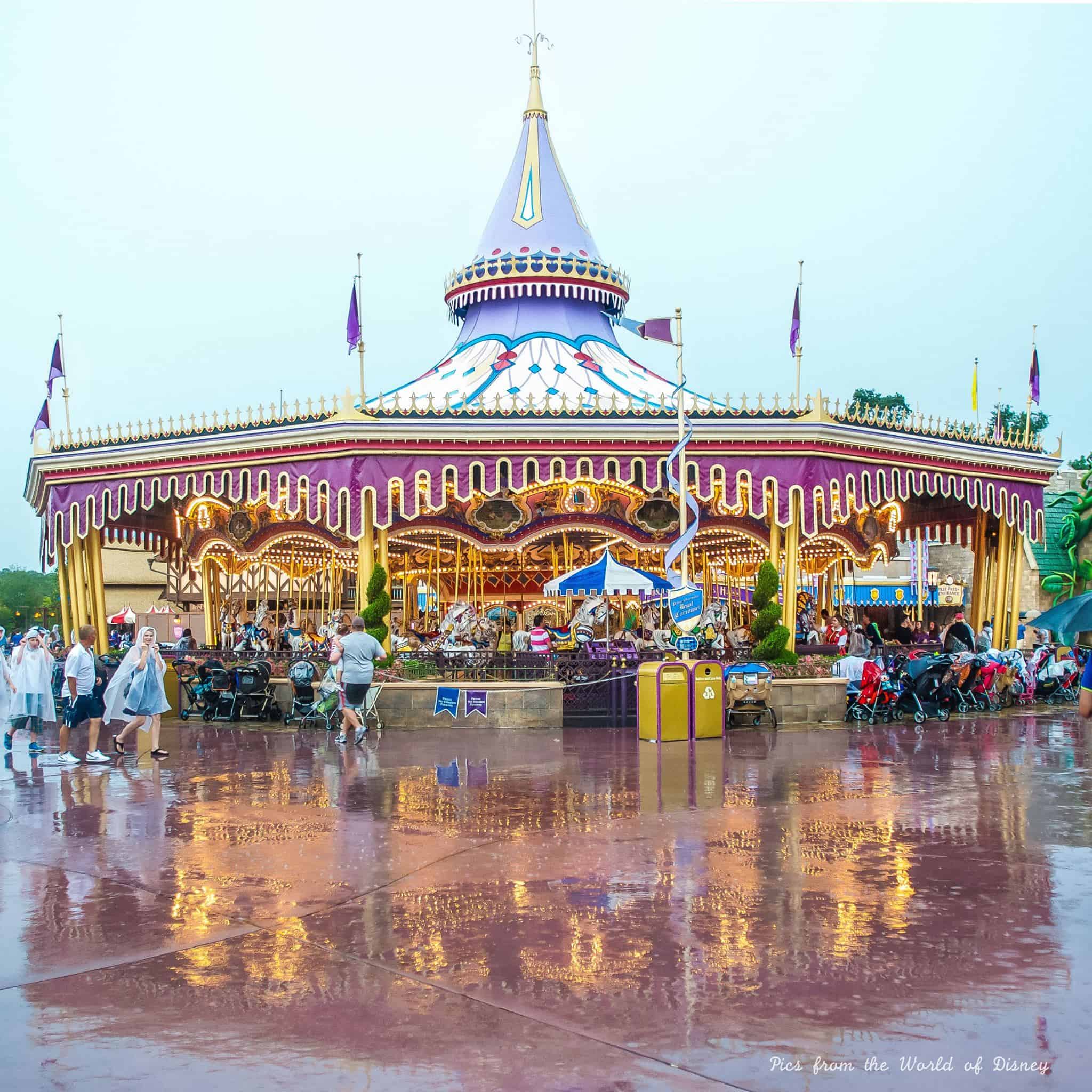 When you go to Walt Disney World, two things you want to do is 1) Ride the best rides; and 2) Avoid the long lines as much as possible.

To be included on this list, the ride had to be both a quality, underrated ride in my opinion and have a short line (with the slight exception of Dinosaur, which I mention below). That’s

That’s why, for example, the Mad Tea Party in the Magic Kingdom and Triceratop Spin are not included. Yes, their lines are pretty short, but I don’t consider either of them to be particularly impressive rides.

As much as I, um … really don’t like DinoLand U.S.A. in Animal Kingdom, it has one really good thing going for it, and that’s Dinosaur.

The concept of Dinosaur is that you travel back in time to rescue and return a living dinosaur before the species goes extinct … but then — oops! Someone miscalculated and you arrive in prehistoric times just as a giant asteroid is hurtling toward Earth.

There are great special effects and it’s more of a “thrill ride” than I expected it to be. My son Benjamin went on it for the first time on our latest visit, when he was twelve, and it was one of my favorites rides of the trip, second only to Epcot’s Test Track. He was disappointed that we were only able to ride it once.

Is Dinosaur scary for little kids?

Potentially, yes … not so much in the way a roller coaster is (the rides only goes 12 miles and has only minor drops), but because it is dark and because some little kids might find the “Oh no, our lives are in danger!” aspect to be more upsetting than amusing. There is a height requirement of 40 inches.

Note: It’s pushing it a little bit to include Dinosaur on a list of rides with short lines. It has the longest lines of any of the rides on this list, but any time we’ve gone, we’ve waited for 20 minutes or less, which is not a bad wait for what this rides offers, in my opinion.

Fastpass reservations are available for Dinosaur, but I would recommend getting a FastPass for Expedition Everest, Flight of Passage, Na’Vi River Journey, or Kilimanjaro Safaris instead.

If those rides don’t interest you or you can’t get a FastPass for them, then I would consider getting one for Dinosaur.

This ride in Epcot always has a short line, mostly because most people don’t even know it exists and it’s almost impossible to find unless you’re specifically looking for it.

Located inside the pyramid-shaped Mexico Pavillion in Epcot, The Gran Fiesta Tour is a slow, dark boat ride based on this 1944 film starring Donald Duck and his two friends, José Carioca and Panchito. It’s a nice combination of animation, animatronics, and Mexican culture.

This is a ride that all ages can enjoy. It has no height requirements and no scare factor. Plus it’s a nice way to stay cool for a while after you’ve been trekking through the World Showcase in the heat.

Tom Sawyer’s Island isn’t exactly a ride (I guess “attraction” is the official word), but rather a “getaway” in Frontierland that you travel to by raft.

On our family’s second visit to Disney World, right after we all had lunch atLiberty Tree Tavern in the Magic Kingdom, my husband Rob casually said, “Hey, let’s ride over to Tom Sawyer Island.”

I looked at him like he was crazy, because:

a) What kind of lame attraction was that?

But I reluctantly agreed.

And yes, this is definitely one of those times where my husband was right. We loved it.

Besides the ride on the raft being fun in itself, Tom Sawyer Island has a cave, a windmill, a tipsy barrel bridge to cross; and paths to follow. It’s pretty and relaxing for adults and fun time to play and explore for kids. It’s a nice way to escape the “theme park atmosphere” and do something different for a while. Some people even pack a picnic lunch and plan to stay for a couple hours.

If were you were going to list all the rides in Magic Kingdom, you might forget to even include, but it is a ride, as well as a means of transportation.

We usually get on at Main Street (the least crowded station) and travel to Fantasyland. The scenery as you go through Frontierland is fun, and it’s nice break to get where you’re going without walking, for a change.

My son Benjamin loved trains when he was younger, so riding this real steam-powered locomotive was a treat for him, especially when they blew the whistle.

If you choose to ride the entire loop, it’s is 1.5 miles and lasts for 20 minutes.

Be aware that the railroad shuts down immediately before and during parades.

Living with the Land (Epcot)

I know, I know … this one may sound like it could win an award for Most Boring Disney World ride. A slow boat ride with no cartoons, music, or animatronics … where you get an agriculture lesson?

But I found it Living with the Land to be surprisingly compelling.

It takes you through science laboratories and a futuristic greenhouse, revealing some of the food breakthroughs and experiments that Disney workers have made or are currently attempting.

My daughter Rebecca, who has always liked science, particularly enjoyed this one. There are plenty of “Hidden Mickey’s (which are not all the hidden) throughout the ride as well.

What’s really fun, especially if you’re a Chip and Dale like I am, is to eat at the Garden Grill, the rotating table service restaurant upstairs, where you can see inside Living With the Land during your meal. There is even a detailed farmhouse that you cannot see during the ride, only from the restaurant.

It’s tempting to zip right past the Prince Charming Regal Carrousel, dismissing it as “just another merry-go-round” as you head through Fantasyland on your way to Dumbo or Peter Pan’s Flight.

But in typical Disney fashion, the Carrousel was meticulously designed and is not “just any merry-go-round.” For example, each horse has its own unique design and is decorated in real 23-karat gold leaf.

It’s a ride that’s great for all ages (my mother loved it she and my dad took my family to Disney World) and the line is never long.

I highly recommend that you ride this one after dark, as it’s particularly stunning when the lights are turned on. 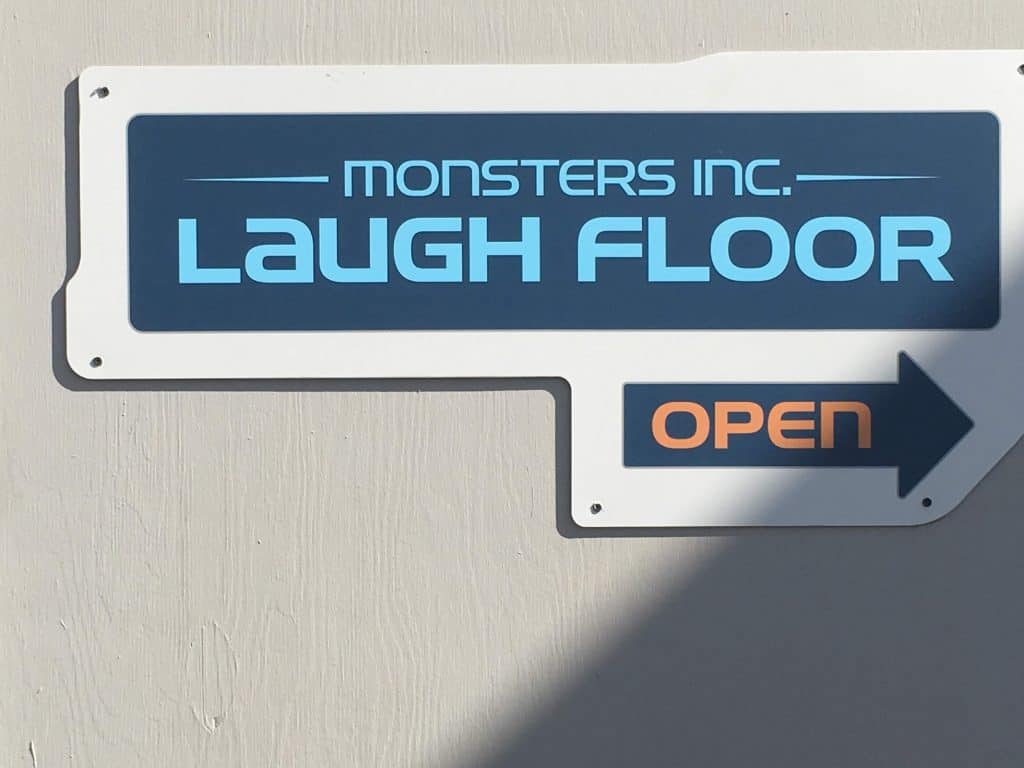 Maybe it’s just me, because I rarely hear people singing the praises of this Tomorrowland attraction, but I really enjoyed this one.

It’s an interactive stage show with Monsters doing stand-up comedy, night club style, and interacting with the audience. They don’t ask anybody to come front or anything, but the camera will show you on the screen up front. (Yes, both me and my daughter Rachael got “picked on.”)

I thought Monsters, Inc. Laugh Floor was fresh and funny and got a lot of laughs for the crowd. The best thing is that, because of its interactive nature, it’s literally a different show every time, which you can’t say for most Disney shows.

On our last Disney trip, my daughter Rebecca said, “This is a really underrated ride!” so of course I have to include it here.

Some people dismiss this ride as being “just like Dumbo,” but some people like it because it’s just like Dumbo, but has almost no line. (The last time we rode it, we almost literally just walked on.)

My kids like how it has the “spitting camels” and how one rider can maneuver their carpets up and down, while the other moves it from side to side.

Another plus to this ride is that, once you’re finished, you can easily walk over to Aloha Isle and get a Dole Whip.

I haven’t been on this ride since I was a kid, and I will always think of it as the WEDWay People Mover.

This monorail-style tour of Tomorrowland may sound boring. But if you’re looking for a short line in the Magic Kingdom, you can’t get much shorter than this one (and it’s neighbor, Carousel of Progress, which I didn’t include on this list only because — believe it or not — I’ve never ridden it).

The People Mover is an elevated, slow-moving, air-conditioned tour of Tomorrowland, including the insides of both Space Mountain and Buzz Lightyear’s Space Ranger Spin.

The People Mover has almost a cult following, with people who ride it repeatedly (the cast members will sometimes let you stay on and ride again, if you ask them). They love it for being peaceful and air conditioned. It’s also a beautiful view when you ride it at night.

What do you think are the most underrated rides at Disney World?

Now it’s your turn. What are your favorite lines that tend to be forgotten? What rides do you love that rarely have a long line? Let us know if the comments below! 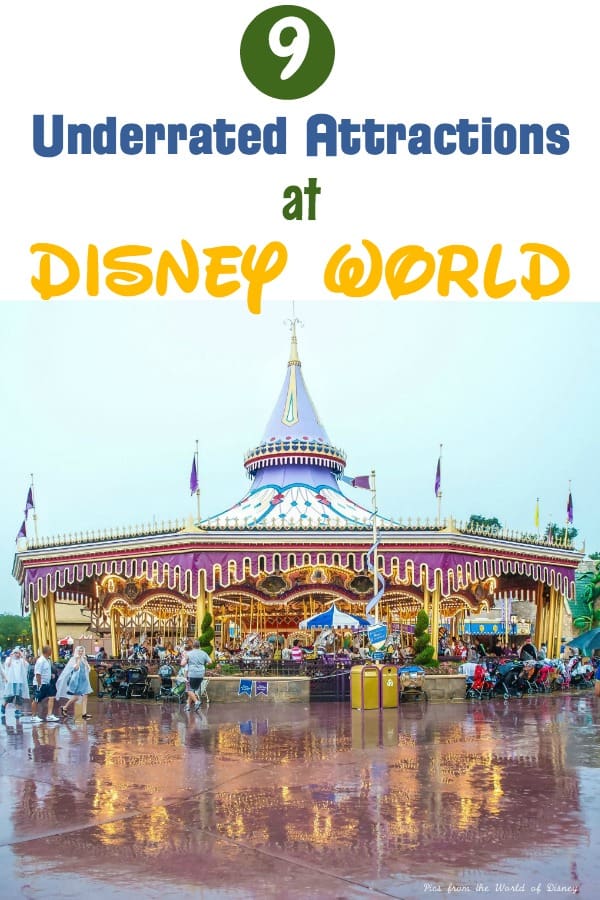 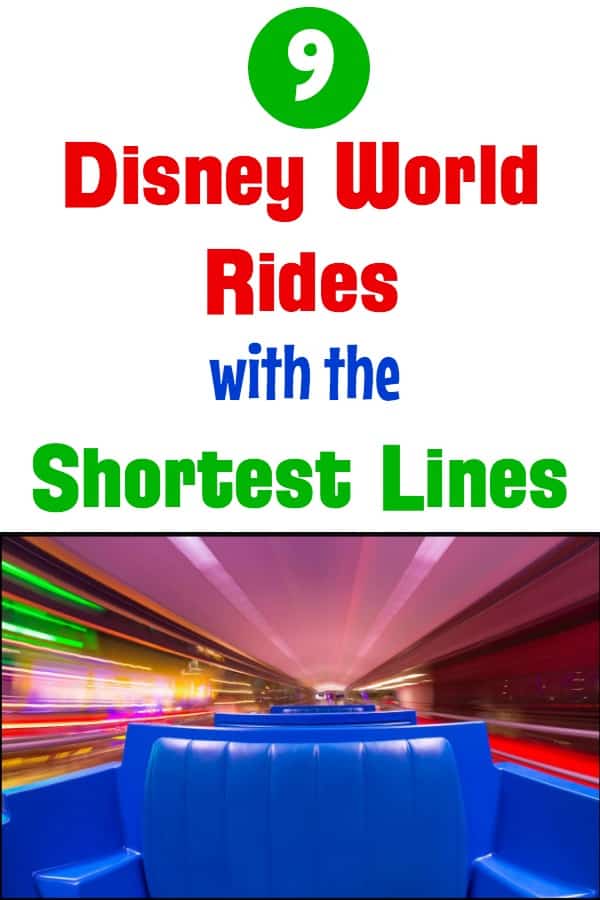 7 thoughts on “9 Underrated Disney World Rides (With the Shortest Lines!)”