Review of Kringla Bakeri og Kafe in the Norway Pavilion 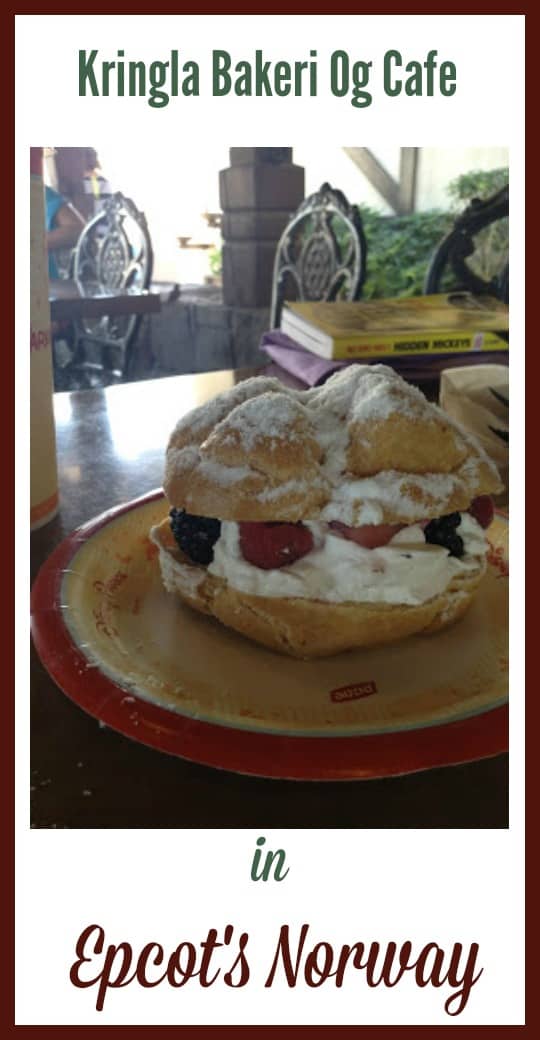 Kringla Bakeri og Kafe is what Disney calls a “counter service” (as opposed to table service) restaurant located in the Norway pavilion of the World Showcase, near the Akershus Royal Banquet Hall and the Norway gift shops. You can easily spot it by the “hanging royal pretzel” wearing a gold crown by the entrance.

The restaurant is very small and no-frills, with just enough room inside to order at the counter. The seating is all outdoor in a covered area. It isn’t the kind of restaurant that you go to for the decor.

It is, however, considered one of the best — if not the best — bakeries in Epcot.

On both our visits to Kringla, it never even occurred to us to consider “real food.” Our only decision was which pastries to get. However, apparently they have some pretty humongous sandwiches, including the Norwegian Club with lingonberry mayonnaise, and the Ham and Apple Sandwich, with Jarlsberg and Muenster Cheese and a Sweet Apple Chutney (that one would be my pick.)

However, like I said, we went straight for the sugar. Rachael exclaimed, “I want everything!” as we looked as the dessert display. But deciding that would be impractical, we instead opted for a Troll Horn.

According to the Disney Food Blog, it was originally known in Epcot as the Cloudberry Horn because of the cloudberry jam mixed into the cream. Then supposedly there was a temporary shortage of cloudberries in Norway, so they began (again, temporarily) using lingonberry jam instead. I guess nobody wanted to name it the Lingonberry Horn, or the Whatever-berry-is-more-available-right-now Horn, so they went with Troll Horn instead.

Whatever you choose to call it, it’s a buttery sweet pastry shell coated with coarse sugar that has a slightly tart, rich cream filling on the inside.

Of course we couldn’t just get one dessert for the three of us, so we also split one of these:

I love fruit in my desserts, so the Berry Cream Puff grabbed my eye right away. It’s a traditional cream puff, made of pate a choux, filled with real, slightly sweetened, whipped cream and decorated with fresh berries.

Of course, if you’ve already done your research, you know that the School Bread is probably the most famous pastry a Kringla Bakeri Og Cafe. It’s sweet bread roll filled with vanilla pudding or custard, then covered with icing and toasted coconut.

There seem to be two schools of thought on the School Bread (pardon the unintentional pun). Many people absolutely love it, party because it is “not too sweet,” and because there is an abundance of creamy custard. Other people are underwhelmed by it, calling it “dry and bland.”

We opted not to have it on this particular visit, for the simple reason that we had eaten it in the past and wanted to try something new. It’s been a few years now since the one time I had School Bread, and I honestly can’t say which camp I fell into. I certainly don’t remember hating it … but I have the feeling that if I had remembered it as one of the most exquisite things I had ever eaten in life (like the Napoleon in France), I would have made sure to get it on this visit as well.

Another popular favorite, which we have never had, is the Lefse, which is potato bread wrapped around cinnamon sugar. It looks similar to a churro.

Planning to Snack Around the World?

Although I’ve never done this myself, it’s a popular Disney pastime to go around the entire World Showcase having one snack at each country’s pavilion. I would highly recommend that if you ever try this, you plan on sharing your snacks with at least one person, and preferably two or three people, so you don’t end up having to quit in humiliation (and possibly the pain of a stomach ache) after the first two or three countries.

If you do plan to take on this challenge, you can make it official with this laminated lanyard passport. It comes in whatever color you choose, plus you can have your name and a Disney character of your choice put on the bottom.

As I discovered when writing my post about the Tusker House character breakfast, you can get a different pair of mouse ears for just about everything you do — including your visit to the Norway pavilion!

These ears have a red and white Scandinavian design and are topped off with a green bow. Cute!

Have a great time on your visit to Epcot’s Norway and enjoy some tasty treats! 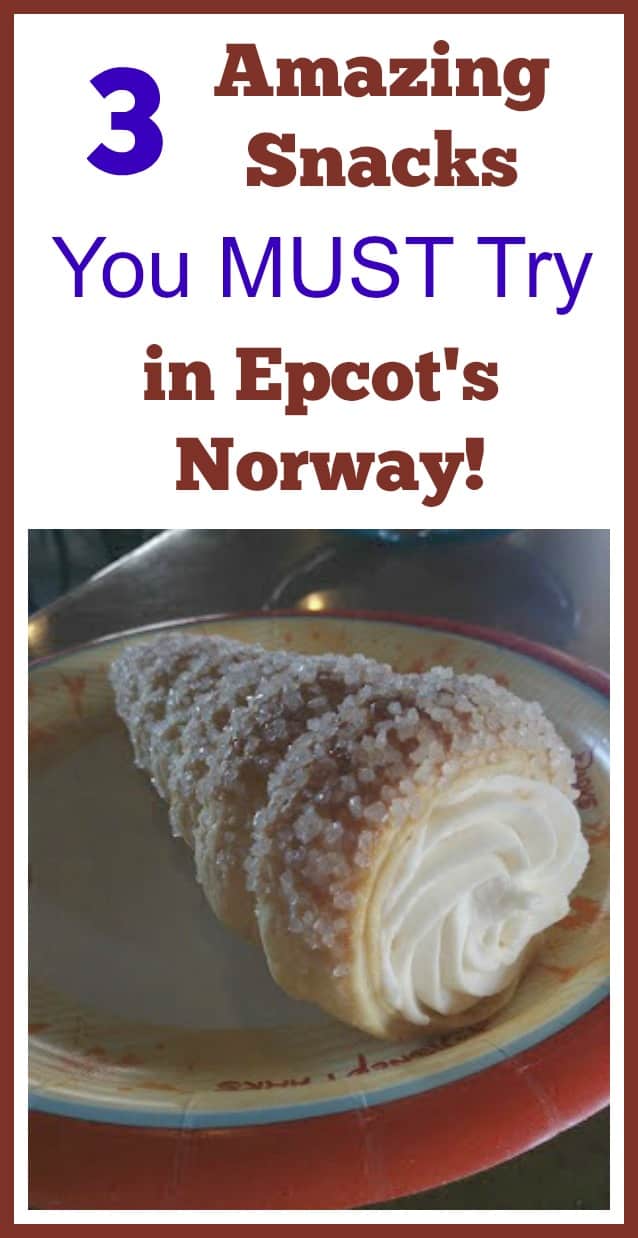