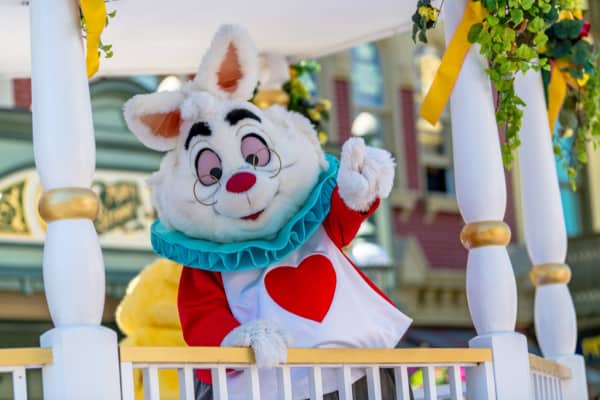 Are you considering a Walt Disney World vacation, but wondering if your kids are too young (or too old)?

Obviously there’s no magical answer to when to take you kids to Disney World. Some of the factors to take into consideration are how many kids you have, how spaced out they are, what your school schedule is like, how much money you have, and whether or not you’ll be able to take another Disney trip within the next 4-5 years.

After reading this post, you’ll know some of the pros and cons of a Disney vacation with each age group and what our experiences have been over the years.

I have never taken a baby to Disney World, and frankly, would not really want to.

Between worrying about nursing and bottles and diapers and changing stations and the intense heat and naps (one of my babies would not sleep in a stroller at one point … it makes me tired just thinking about it.

Certainly many families have gone to Disney World with babies and had a great time. (And if you had, I’d love for you to leave a comment below.) So it most certainly can be done.

But if you’re considering going to Disney World with a baby, I would highly recommend waiting a couple years if at all possible. On our very first Disney trip, my son didn’t exist yet and my daughters were two and a half and four and a half years old and both out of diapers.

If you can go when your youngest is two and a half and fully potty trained, I say do it.

Your youngest will get in completely free (because they’re under 3 years old), and your older kids will most likely still be at the “child” (ages 3-9) price.

The nice thing about going to Disney World at this age is that everything makes them happy.

It wouldn’t have occurred to them to complain or feel disappointed because we were staying off-site. (They happily called the condo “The Disney House.”) They couldn’t care less that we ate sandwiches for lunch and had dinner at Perkins Pancake House near our condo instead of having any character meals. They weren’t the least bit disappointed that we skipped the parks altogether one day.

In fact, later I asked my four year old what her favorite part of the trip was, and she said it was going to the pool.

So going to Disney World can actually be fairly cheap at this age.

The downsides, of course, are: This is probably the sweet spot, depending on how many kids your have and how spaced out they are.

The kids are old enough to know what’s going on and and be a bit more self-sufficient, but young enough to enjoy it in a child-like way. They’re less likely to be scared by things and more likely to be tall enough (and brave enough) to ride the roller coasters.

Plus they still get the child prices until they’re 9 years old.

So if you wanted me to give you the perfect age, I would say to go right before your oldest child turns 10.

Now one big issue that comes up at this age is:

Should we take our kids out of school for a Disney World vacation?

Fortunately, we never had to address this. My kids were homeschooled for many years, once the oldest started going to public school, we went to Disney during our district’s week long “fall break” in September.

If you’re debating whether or not to take a Disney vacation during the school year, the first thing you need to do is check the school’s policies on absences and make-up work.

I’ve heard of anything from family vacations automatically being excused absences, to having to write a letter to the principal explaining the educational value of the trip, to getting angry phone calls from the school threatening to report the parents for truancy.

So first make sure you know what you’re dealing with.

Personally (and I’m a teacher myself), I don’t really have a big problem with the idea of kids missing a few days of school, as long as the kid is a good student and is responsible in making up what they missed. Definitely let your teachers know well ahead of time and be very gracious and respectful about it, since them having to adjust for you adds a bit to their already-full plate.

It’s also a good idea to ask your kids how they fell about missing school. Believe it or not, this can be an issue for some kids, especially if the class is doing something special that week. One of the best Disney trips I ever took was when I went with just my two girls when they were 12 and 14.

Part of it was because it was just the three of us, which made it easier than having to deal with five different people’s preferences.

But part of it was because that age was so easy compared to earlier years. They didn’t need me to go with them to the bathroom or the buffet. They weren’t sobbing on the Disney bus on the way back to the resort after a long day at the park. We didn’t have to deal with people being too scared for this or too short for that. And the girls were much more involved in planning the trip and researching and choosing the restaurants, which was a lot of fun.

It was a really good trip.

Now having that said that, this is an age where taking your kids out of school gets more tricky, not only because of missed work, but also because of extra-curricular activities, play rehearsals, sports practice, etc. Unfortunately, our next trip was not so pleasant. In fact, I almost would go so far as to call it a “mistake.”

For this trip, our kids were 13, 15, and 17. We booked the trip several months in advance, thinking it had a been a while since the whole family had gone.

About a month before the trip we discovered that not only did one kid adamantly not want to go at all, but also the kid who used to be obsessed with Disney couldn’t care less anymore, said they’d rather stay home and hang out with their friends, and begrudgingly went along.

During the trip were texting their friends constantly and were more interested in finding a Starbucks (again) than going on a ride or, God forbid, getting a photo taken with me. Nobody wanted to see any characters. One kid made the comment that they didn’t understand why anyone over the age of 10 would like this place. Another kid chose to stay in the hotel and watch a movie one evening.

I was hurt and disappointed, and I reacted by getting mad at them.

Still, there were some bright moments. I caught the kid who really didn’t want to there saying, “I love this ride” when we were on Splash Mountain. We all had a fun dinner together at Wolfgang Puck in Disney Springs one evening. They really liked both Test Track and Dinosaur. Everyone loved the food at Ohana (although the kids all quickly left in embarrassment when I went to join in with the hula dancing lesson.)

I know that plenty of families go to Disney World with their teenagers and (at least appear to) have a good time, so don’t necessarily be scared off by our experience.

But unless your teens are specifically begging to go to Disney World, I would recommend that you find some new vacation destinations for a while.

What do you think is the best age for Disney World?

Now it’s your turn. Do you think there is a “best” age? Have you ever taken a baby to Disney World, and what was that like? Did you ever go to Disney World with teenagers, and was your experience better than mine? When Will Disney’s Cape May Cafe Reopen?
6 Things to Know About Disney World in Summer 2021