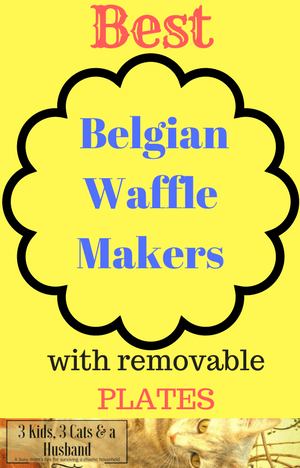 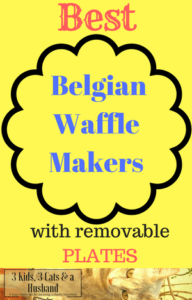 Belgian waffle makers with removable plates make clean-up so much easier. Instead of having to somehow scrub between all the little squares (and trying not to think about the fact that it probably isn’t getting completely clean), you can pop the plates off once they’re cool, let them soak, and them either hand-wash them in the sink or put them in the dishwasher. What could be easier?

I found these two affordable and highly-rated Belgian waffles makers that represent the best of the bunch.

The Cuisinart WAF-300 is almost twice the price as the other two waffle makers in this article, but it does contain some nice features. Unlike the Black and Decker above, it has a timer that starts automatically when you close the lid. It also has six different settings, so you can experiment to find which one makes your waffle is as crispy — or not so crispy — as you like.

It makes four four-inch waffles at a time, making it easier to feed a hungry crowd quickly. Interestingly, it also has a set of removable pancakes plates, so it includes four total plates, all of them dishwasher-safe.

This waffle maker is also cleverly angled so that if you pour in too much batter, it simply drips onto your counter top instead of getting baked onto the sides of the waffle maker, making it a chore to clean. Anything that makes less mess gets an extra point from me!

It comes with tongs and a recipe booklet.

There’s something particularly fun about the the Belgian waffle makers that flip. Maybe because it always reminds us of the hotel breakfast buffets where we love to make our own waffles.

The Hamilton Beach 26030 costs much less than that waffle maker your hotel uses, and some reviewers reported that the handle felt flimsy. However, it has has the same idea of flipping the waffle (which is six inches in diameter) to get it evenly cooked, but for home use.

Unlike the Black and Decker at the top of this article, it comes with a plastic drip tray for any batter that happens to spill out, and it can be put in the dishwasher along with the removable plates. One other nice feature is that the flip handle folds up for easy storage.

It has a green indicator light telling you when the waffles are ready, but it doesn’t make any sound, so you either have to watch it or set your own timer.

This waffle maker does not come with a recipe booklet.