8 of My Favorite Children’s Chapter Books 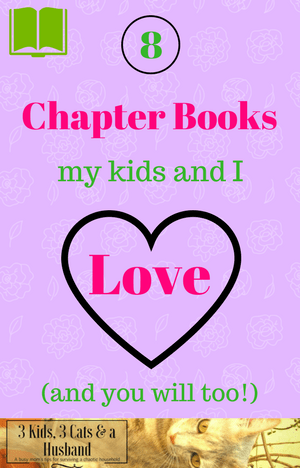 I decided to make a list of some of my very favorite chapter books that I’ve read with them over the years.

I’ve often thought it would be interesting to know how many hours I’ve logged reading to my three kids over the last thirteen years or so. Surely it’s been well over a thousand hours, possibly even several thousand.

That’s a lot of books, and many of them I’ve read out loud at least twice.

I decided to put together a list of some of my favorites:

Half Magic by Edward Eager

I still have the copy of Half Magic by Edward Eager that my older brother had in the mid-70s. It’s the story of a family of four children who find a magic charm that, as it turns out, grants half a wish.

One of the things I love about Edward Eager is you can tell how much he is enjoying himself and how in touch he still is with the young boy who adored books by Emily Nesbit. He’s clearly writing what he enjoys, and not what he thinks kids would enjoy — or worse, what he thinks kids need to hear.

My second-favorite Edward Eager book is Seven-Day Magic (make sure you read Half Magic first.) And the official sequel to Half Magic is Magic by the Lake, which I only read once, but plan to read it with Benjamin within the next few weeks.

The Westing Game by Ellen Raskin

A couple summers ago we had a routine where after lunch the kids and I would go in the living room and I read The Westing Game to them while Benjamin played and the girls colored or did crafts or something. This is somewhat of a challenging book — Rebecca actually took written notes about all the characters — but incredibly unique and surprisingly sweet.

After we read The Westing Game,  I got some more Ellen Raskin books, particularly for Rebecca. I enjoyed The Mysterious Disappearance of Leon (I Mean Noel) quite a bit.

I did not like Figgs & Phantoms, the author’s first book.

The Phantom Tollbooth by Norman Juster

How can you not love a book where you jump to a land called Conclusions, eat Subtraction Stew that makes you hungrier than when you started, have to “eat your words,” and have a best friend named Tock, who is a a literal watch dog? The Phantom Tollbooth has a certain whimsy and creativity that I just love.

I distinctly remember laughing while my mother reading Mrs. Piggle-Wiggle’s Magic by Betty MacDonald to my brother and I, so I have a special fondness for this book. Mrs. Piggle-Wiggle is a cheerful lady who loves children and always has “cures” for bad table manners, heedlessness, interrupting, etc. The funniest thing about this series, in my opinion, is the conversations and reactions from the different parents.

Our entire family enjoys the Encyclopedia Brown books by Donald J. Sobol — including both my husband and I when we were kids. If you’re not already familiar with this series, each book contains about ten short stories that Encycopedia solves, and you have to figure out how he did it. The answers are all in the back of the book.

When I was a kid and read the stories myself, I would think, “Huh, I don’t know,” and then flip to the back to read the answer. That was okay, but what has been really fun about reading it out loud to my kids is that I can usually have at least a slight idea of what the major clue is, and give the kids hints, and we can often solve it together. (Sometimes I have to peek at the answer, but still them give them clues.)

Tales of a Fourth Grade Nothing by Judy Blume is another classic, in my opinion. Who can forget “Eat it or wear it!” Peter calling his little brother Fudge “Fang” after he knocks his front teeth out?

As much as I loved this book, for some reason I was not crazy about either Superfudge or Double Fudge … although I did like Fudge-o-Mania almost as much as the original.

Well, there’s my list. What about you? Share some of your favorite children’s chapter books in the comments!