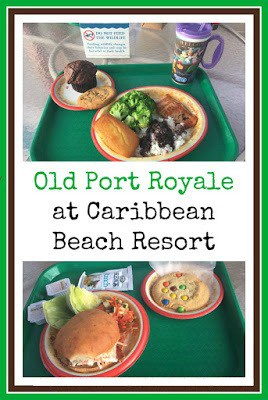 Rachael and Rebecca and I are staying at the Caribbean Beach Resort at Disney World this week. The counter service restaurant there is Old Port Royale, and since we’re on the Disney Dining Plan and it’s close and we like the food, we’ve eaten there several times this week.

The decor was quite nice and colorful, I thought. When we ate there in the middle of the day and it was hot out, we got a table inside, but usually we ate at one of the tables outside outlooking Barefoot Bay.

I ordered the Crispy Chicken salad with Pineapple Slaw, which comes with either fries or a salad. Rebecca and I split it, and it was plenty for both of us.

Rachael loved the salmon dish with black beans and rice and broccoli.

Since we were on the Disney Dining Plan, we also got a choice of dessert or drink. But since we were staying at a resort, we already had cute souvenir cups (see the photo above), so there was no reason to buy drinks.

That meant a week of a lot of desserts, which we would bring back to the room for later.

There were a couple days that we didn’t want to get to the parks first thing in the morning, and we went to Old Port Royale for breakfast. Rachael and I each got a Bounty Breakfast Platter, which was eggs, sausage, bacon, potato wedges, a slice of French toast, and a biscuit. Oh yes, and since we already had drinks, a dessert. Did I mention that you get a ton of food with the Disney Dining Plan? Rebecca and I split a meal and brought our dessert back to the room for later, and we still didn’t finish everything.